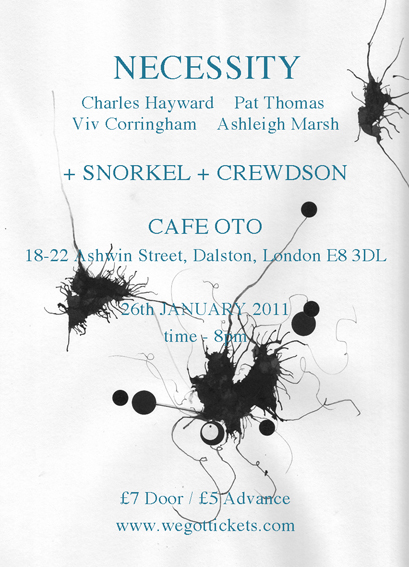 The initial line-up for this evening which was to feature MONKEY PUZZLE TRIO and CRACKLE has unfortunately had to be cancelled due to an injury to bassist Nick Doyne-Ditmas [we wish him a speedy recovery].....

Recent releases include – Monkey Puzzle Trio with Viv Corringham and Nick Doyne-Ditmas. About with Pat Thomas, John Coxon and Alexis Taylor from Hot Chip [with whom he has also recently collaborated] and Clear Frame with Hugh Hopper, Lol Coxhill, Orphy Robinson and Robert Wyatt.

Has been making his mark on the Oxford and London scenes [and elsewhere], both as a pianist and as a performer of electronic keyboards and other electronic gadgetry. Has collaborated with the likes of Derek Bailey, Lol Coxhill, London Improvisors Orchestra, Steve Beresford, Tony Oxley and John Edwards.

"Deeply inventive, forthcoming EP 'Dust' has already gained some fantastic reviews. Removing the flab from dubstep, Crewdson harks back to the skeletal post-garage of Burial - emotive, introspective and shrouded in mystery." [Clash Magazine]

"With yet another brilliant new style of electronic music comes yet another inspirational artist." [Rock Feedback]

"There’s a disembodied voice kicking around the sound of a hundred cassette decks unspooling at once. But he’s got a beat to counteract, tiny percussion and a broken snare, as though he’s throwing the literal kitchen sink full of instrument junk at our stupid American desire to box him in." [Fader]
Email ThisBlogThis!Share to TwitterShare to FacebookShare to Pinterest

CREWDSON will be playing a lunchtime gig [1.15pm] at Pure Groove's pop up shop on 17th Dec.


His debut release on Slowfoot, 'DUST EP' featuring remixes by GRASSCUT and BASS CLEF will be in the shops 13th Dec..... 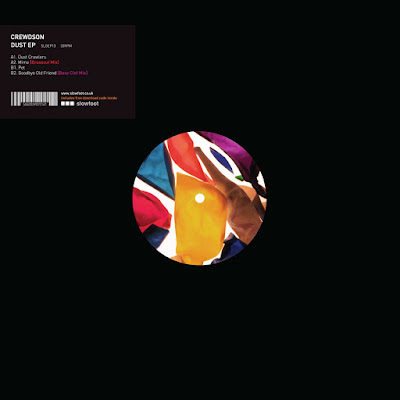 '......Sculpture, an audio-visual duo of London based musician Dan Hayhurst and animator Reuben Sutherland, whose working methods demonstrate a startling synergy. Live, the duo suspend a camera above a Dansette-style turntable upon which Sutherland plays his picture discs. Their static images suddenly spring to life, spilling out surreal, luridly coloured, twisted Pop Art imagery. The music is produced using tape loops - spliced tape extracted from C-90s - wrapping one around the head of a tape deck and feeding the warping, oscillating audio through a matrix of guitar pedals, mixer and sampler.
''We met fairly randomly and realised we were both using very similar techniques and had a common aim: derangement of the senses to achieve a transcendental 'thing'....the process is important, the way its thrown together: style, rhythm, flair'.
It'd be a mistake to conclude from the vintage of their gear that Sculpture are pursuing a retro analogue aganda. Their purpose is to explore the brain's perceptual thresholds - 25 frames-per-second threshold for images and 44,100 samples-per-second for sound - beyond which sensation becomes smooth and continuous. Sculpture hover at these sensory junctures, invoking the cortical feedback mechanisms of the brain.'
(Matthew Ingram - The Wire - December 2010)