Check out some the press from the PRESCOTT - 'ONE DID' , aswell as Kev Hopper's hilarious promo video.

'…the wildly eccentric melodic and harmonic choices and snare-tight but restless compositional arrangements make this a remarkably confrontational and uncomfortable (albeit totally compelling) listen… As far as British-politician-themed art-rock bands go, Prescott are a unique and mischievous proposition…' [The List] Matt Evans

"The real beauty of the material lies in the lithe and minimalist nature of group... ...More than all this, as the group’s first recording One Did serves to underline the true potency of the experimenting that’s key to the Prescott trio." [Sonic Router]

"...Hopper revels in angular mischief throughout One Did's 11 gleefully perverse instrumentals. The fi"Best band in the world…ever!" [John Prescott]nest moments here - the tense, Can-like shuffle of Didism; the twitching, cinematic jazz menace of Philby Flies - are throwbacks to Stump's heroically non-conformist clatter, and a tantalising glimpse of what's in store if Hopper continues this joyously wayward course." [Prog Magazine]

" You wouldn’t be surprised to know that former Stump bassist Kev Hopper is behind this gem... ... A tirade that breeds some nice irregular metrics, funky falls and even a smidgen of dub." [Freq]

"For sheer verve this will be a tough album to beat - by turns odd, melodic, exciting." [Terrascope Rumbles]

"...all three have fully succumbed to and are in thrall of th' groove - albeit a refreshingly inventive and unconventional one." [Terrascope] 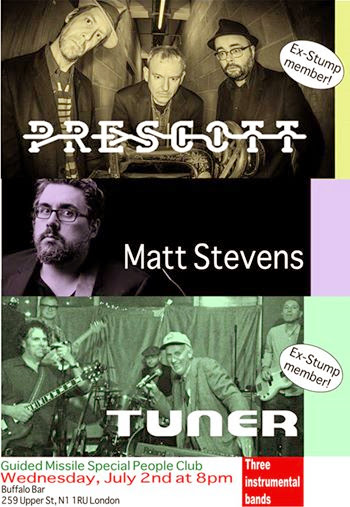