New signings to the Slowfoot roster celebrate the release of their debut recording 'White World' [release date 20th Sept].
Follow the link below to buy advance tickts before they disappear!!.....

This gig marks the release of their debut album ‘White World’ on forward thinking indie label Slowfoot – Their music is driven by the restless energy, invention and power of Hayward’s drumming and underpinned by the languid and exploratory double bass playing of Doyne-Ditmas, to which Corringham adds, with the aid of a loop pedal, her unique collage of words and sounds….

“We are making new song forms based on live improvisation. Every song is created in the actual moment of performance. I arrive at each gig with a fresh stack of lyrics and choose which one to use as the song starts to unfold". [V.C]

Together they create a distinctive sound world which is exhilarating and immersive and relies on the sensitivity and experience of all three musicians.

Recent releases include – About with Pat Thomas, John Coxon and Alexis Taylor from Hot Chip [with whom he has also recently collaborated] and Clear Frame with Hugh Hopper, Lol Coxhill, Orphy Robinson and Robert Wyatt.

Since working with acclaimed avant-jazzers Pinzki Zoo in the mid 80's he has been a mainstay of the south London music scene for many years, collaborating many times with drummer Charles Hayward and with artists/bands as diverse as H2C7, Charles Stuart, Skip Macdonald, Vibration Black Finger & K-Scope. He is currently recording and performing with Crackle, whose debut album ‘Heavy Water’ was released on Slowfoot in 2008.

South London-based collective whose members come from different corners of the alternative scene, bringing together the tactics of improvisation, electronica, and sound art. Propelled by the rhythms generated by cheap samplers and drum machines, Snorkel revel in the joy of psychedelic repetition throwing in elastic interruptions on guitar, analogue and digital synthesisers, trombone, live samples and vocals. 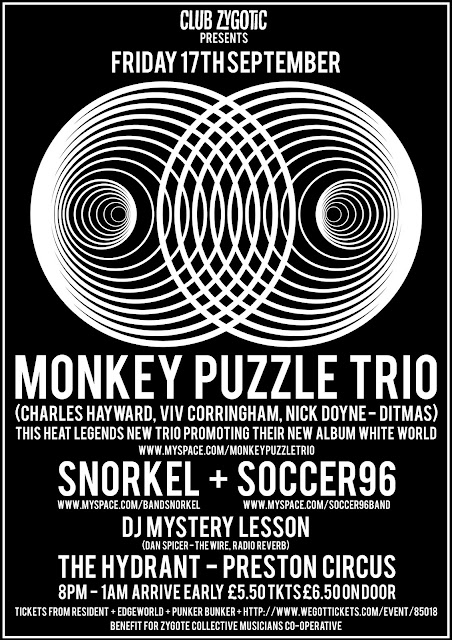